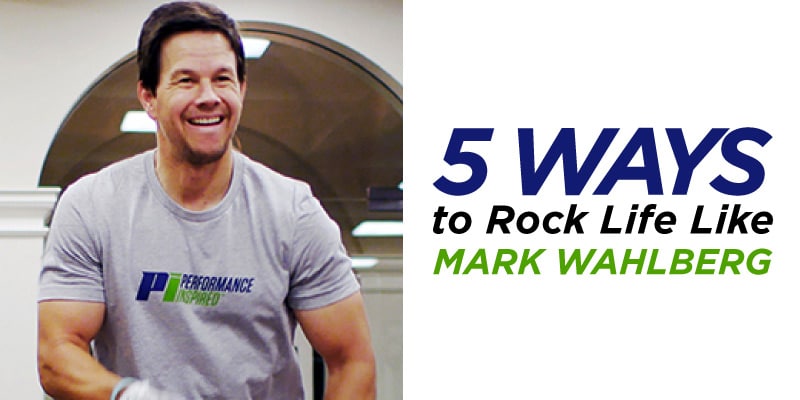 All it takes is one look at Mark Wahlberg’s life to know that he rocks it. He’s a man in control of his own destiny, who works hard and knows what matters in life. His faith and family take precedence, but his fitness, philanthropy and the food he fuels himself with are not far behind. Here are a few of the ways Wahlberg truly rocks his life.

Mark Wahlberg is an actor, producer, businessman and, most importantly, a man of great faith. Amid his hectic schedule of filming, creating, working out and spending time with his family, Wahlberg makes his faith a priority. In an interview with Parade Magazine, he described his weekend routine, which involves not one, but two trips to church on Sunday morning.

His dedication to worship is clear. His faith and Irish Catholic background, he says, is a crucial part of his life.

Wahlberg starts each day by focusing on his faith. He begins every morning in prayer.

“The first thing I do when I start my day is, I get down on my hands and knees and give thanks to God,” Wahlberg told the Catholic Herald.

Even when his schedule is packed and his kids are less than thrilled, he makes visiting his place of worship a priority.

“Whenever I go outside of my house,” he said, “the first thing I do is to stop at the church. The kids will be mad with me. ‘Daddy! It takes too long!’ I’m saying, ‘It’s only 10 minutes and this is something I really need to do.’ Because I do. If I can start my day out by saying my prayers and getting myself focused, then I know I’m doing the right thing. That 10 minutes helps me in every way throughout the day.”

Dedication, like that to his faith, is a theme in Mark Wahlberg’s life. It’s his dedication to his health and fitness that’s led him to achieve his famously well-defined body. Without his commitment to his workout routine, he wouldn’t be the Mark Wahlberg the fitness world knows and loves.

Much like his faith, his fitness factors in early in his daily routine. Wahlberg told Ellen Degeneres on the Ellen Show that he starts his day with a healthy breakfast at 3 a.m. and hits the gym with a friend immediately after.

“I wake up at three,” he said, “I go down to the kitchen and make myself egg whites, Ezekiel bread, almond butter with a little avocado. I go downstairs, I work out for about an hour with my buddy Jonathan.”

That’s serious dedication. And that’s just his everyday routine. When Wahlberg is sculpting his body for a role, his tenacity really shines. For his role as a bodybuilder in Pain & Gain, Mark packed an additional 40 pounds of muscle onto his already impressive frame. He told Men’s Health what it takes to make those kinds of gains – and what it takes to change direction and prepare for a whole new role.

“If I’m training for a specific project,” Wahlberg told the magazine, “then I just keep my eye on the prize. It’s not something I do every day of every month of every year. It’s for specific projects. After we finished Pain & Gain, I went right into 2 Guns (with Denzel Washington), so I immediately had to lose 30 pounds in 30 days. So I started playing basketball right away, full court basketball every day to shed the weight.”

Just like Wahlberg is intensely dedicated to his fitness, he’s committed to his healthy diet. (Are you sensing a trend yet? Mark Wahlberg doesn’t half-ass anything.) When he was training for Pain & Gain, his commitment to his diet was just as important as the time he spent in the gym. Wahlberg told Men’s Health that he ate as many as 12 meals a day to bulk up.

“Sometimes you have to get up in the middle of the night for a meal,” Wahlberg said. “I’d have a big meal and go to bed at 9 p.m., and then I’d get up at midnight to eat again, and I’d still be full from the last meal.”

“That sounds horrible,” the interviewer responded. And while it might not have been any fun, Wahlberg did what was necessary to meet his goals.

Through all of his hard work, Mark Wahlberg has achieved a certain level of fame, though you’d never know by talking to him. He was thrust into the spotlight at the age of 13 and has spent most of his life in the public’s eye. As a rapper, actor, model, businessman and producer, Wahlberg’s work is visible and with that comes all of the trappings of fame.

But the limelight doesn’t get to Wahlberg. He’s too focused on being the best version of himself, constantly improving and doing the things he loves, to be concerned with fame. Rather than buy into the movie star mentality, Wahlberg uses his position to help others. He’s the recipient of the 2015 James Gandolfini Award from the Wounded Warrior Project, honoring an individual in the public eye who exemplifies the values of the Wounded Warrior Project. He’s also the founder of his own charitable organization, the Mark Wahlberg Youth Foundation, aimed at eliminating the barriers that sometimes prevent youth from succeeding and making sure that every child’s dreams and goals are accessible.

Above his career, his fitness, his philanthropy, Mark Wahlberg values his family. He’s a devoted husband and father of four. His kids are his world and he says his family comes first – even before his beloved Patriots. Even during the Super Bowl.

“I had to leave the game early because my youngest son wasn’t feeling well,” Wahlberg posted on Instagram, captioning a photo of his family decked out in Patriots gear at Super Bowl LI. “Trust me, I would have loved to be at the stadium – but family first.”

As the youngest of nine kids, Wahlberg’s always been steeped in family. Now he owns the Wahlburger chain of restaurants with his brothers Donnie and Paul.

Beyond anything else, Wahlberg’s life is one of dedication and determination. He knows what’s important to him – his family, his health, his faith and his philanthropy – and that’s where he pours his attention. Anyone can take this model and apply it to the things that matter most to them.