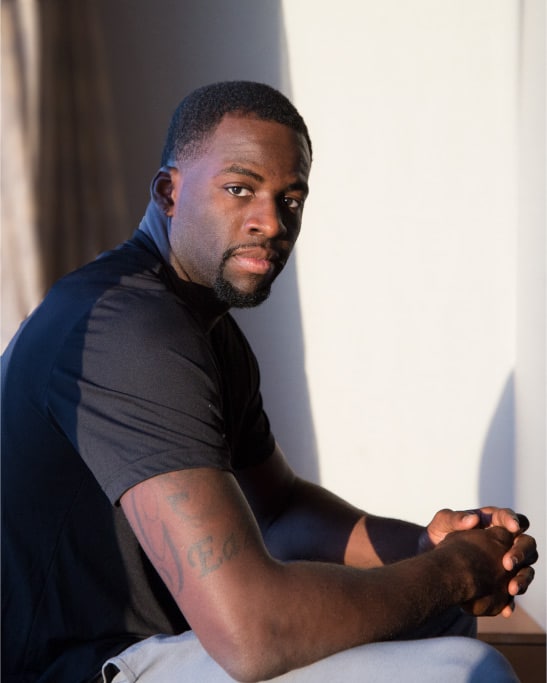 How to Win On and Off the Court Like Draymond Green

There are a lot of reasons to want to be like Draymond Green. First and foremost, by almost any measure, the man is a success story. And, like all good success stories, his achievements aren’t just a happy accident. The man may make it look simple and effortless, but Green puts time and work into his life on and off the court.

He works hard and there’s a lot to be learned from a man who works hard, pursues and achieves what he sets his mind to. Green is versatile, always changing, always learning and always doing his best. He’s sharp, thoughtful and confident in his abilities as a star NBA power forward for the Golden State Warriors and as a businessman.

Take a page out of Draymond Green’s book and use him as an example of how hard, smart work can help you be your best. Here are a few of Green’s greatest lessons in winning on and off the court.

Draymond Green seems like he can do it all. On the court, he’s unstoppable. At 6 feet seven inches, he’s considered on the small side for his position as power forward for the Golden State Warriors. Still, he’s a fierce defender. “Green can guard good power forwards, he can guard good wings, [then Golden State Warriors coach Mark] Jackson even likes playing Green on very good point guards,” according to an article from the San Jose Mercury News. He guards low. He guards on the perimeter. He guards wherever guarding is needed and that makes him versatile and valuable.

Sure, he can guard, but he can also score. He handles the ball with grace on fast breaks and knows exactly when to pass to a teammate. He’s mastered the three point shot and takes risks that pay off shooting closer to the net. On the court, Draymond Green is capable, intelligent and thoughtful in his playing.

He’s a father to two children, a star player, an outgoing businessman and a socially conscious citizen. Versatile might be an understatement. Green seems to do it all.

Self-doubt doesn’t infiltrate Green’s psyche. He’s one of the best and he knows it. He’s not afraid to stake his claim and know his worth. Green is an NBA All-Star, an NBA Championship winner, an All-Defensive Team player and even won Big Ten Man of the Year when he played for the Michigan State Spartans in college. It’s easy to see why he’s so self-assured.

But you don’t have to be one of the best living basketball players to take a page out of Green’s book when it comes to confidence. Having healthy self-esteem is imperative to winning like Draymond Green. It can have psychological benefits that extend far beyond performance on the court.

“The term self-esteem implies a deeply felt appreciation of oneself and one’s natural being, a trust of one’s instincts and abilities,” says The Social Importance of Self-Esteem, a research book on exactly why it pays to be confident in yourself. “It’s that kind of self-esteem which, instead of being narcissistic, enables us to live generously and peacefully, without delinquency or destructiveness, encouraging one another in our lives and in our growth.”

Boom. Being self-assured the way Green is doesn’t only benefit you – it benefits the people around you too. Be confident and assertive without being arrogant and pushy and you can achieve the success that Green has with his team.

Be Open To Change

Draymond Green is good. Really good. But he knows he can always be better, so instead of just leaning into his natural talent, he’s always striving to improve. He’s open to change and comfortable being uncomfortable. When he entered the NBA, Green weighed about 20 pounds more than he does these days. He realized his size was holding him back and decided to make a change.

He cut out bad carbs, like his beloved pizza, pasta and tacos, to achieve the fitness level and physique he thought would give him the advantage on the court. He started working out even harder than he had been, sometimes lugging stationary bikes from the training room into the sauna for a little extra burn.

And his hard work, dedication and sacrifice paid off big time. In his second season with the Golden State Warriors, he scored more and improved his rebounding, assist, steal and blocked shot averages. Even his famous three pointers got better.

He now clocks in at a lean 230 pounds for his height, which he told ESPN has helped him manage and alleviate his chronic knee pain, improve his stamina and enabled him to cut down on potential mental errors tripping up his game.

He was a good player before, of course. He crushed it in college and helped his team earn a Big Ten National Championship in 2012 and was named Big Ten Player of the Year the same year. All amazing things. But he knew he could do better. Once he shed the extra body fat, he propelled his basketball career even further, making the All-Star Team, the National Team and winning an NBA Championship in 2015.

The thing about Draymond Green is that, behind all of his accolades and accomplishments is hard work. Working to be versatile, working to change, working to be confident and working to be his best. And anyone can choose to put in the work. Your best may look different than Green’s, but it’s worth pursuing.